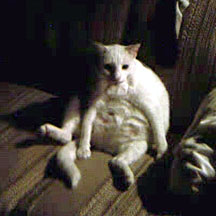 LooLoo was Robin's childhood cat.  A very fat white aesthetically-challenged cat. An ugly neutered MALE cat. His name was actually Casper, but we all called him LooLoo. The name was descriptive, you see... "he's a looloo", as in "he's one strange cat".  He wasn't pretty but he had a fabulously funny personality, including a fetish for all things sparkly. Especially jewelry. He was quite an accomplished cat burglar. He would have loved what I'm up to these days and would be stealing wire scraps and shiny bits. And earrings. He is missed. 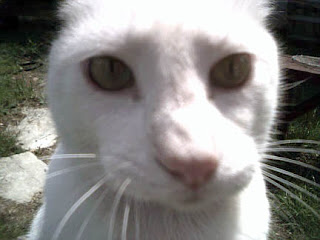 LooLoo used to stash his treasures behind the family room sofa until a shoe box was left lying at the end of the couch and he promptly began putting his treasures in it.  He was then given an attractive wood wine box with a pillow in it which served him well until the end of his days. Yes, he curled up with his treasures, purred over them, slept amongst them. He was LooLoo, and he was magnificent.

When jewelry went missing (once, even Mom's wedding ring!) we knew right where to look; in the family treasure chest - LooLoo's Box.

Robin Delargy / LooLoo's Box
Tacoma, WA, United States
I'm a Sagittarius with an Aquarius moon, born in the year of the Tiger - a water tiger, to be precise. I don't know much about Astrology, whether Western or Eastern, but to those who do I guess that explains a lot. :-)