Steampunk Plays Dress Up, plus lots of rings!

Sunday my Neal the Patient and Tolerant took me to Shipwreck Beads, supposedly one of the biggest bead stores in the world.  I believe it - it's HUGE!  We were there for three hours, which is unlike me - I am NOT a recreational shopper. I came home with carnelian beads,  some tigerseye, a little bit of super fancy Czech fire polished sparklers, some metal beads, a string of 10mm burgundy freshwater pearls, a roll of awesome gunmetal chain (below)  and lots of hematite.  For some reason I have been lusting after hematite.  Here's what I made today:

It was difficult to photograph well, so I left the image file big for the close-up potential.  I think it turned out pretty awesome - what do you think?

Today was a photo day: More proof that I am NOT a hand model:

Lots more in the pipeline, so stay tuned!

Robin
Posted by Robin Delargy / LooLoo's Box at 12:31 AM No comments:

Last night I set out to make a bracelet but wound up with a bracer. Yes, that's right - a bracer.  In other words, a massive metal bracelet.  OK, it isn't armor so it's not technically a bracer, but I made it and so it's a bracer, dangit. Brass, in fact, created from an enormous heavy 5" raw brass stamping from B'Sue Boutiques that has been given an incredible iridescent patina with liver of sulfur (LOS) and then lacquered.  Took some brute force and some serious whacking against my bracelet mandrel to get it bent into shape, with lots of fine tweaks with nylon-jawed plyers.  It was stiff!  But that's good - it won't easily lose it's shape.

The rest of the bracer is made from stamped brass Art Deco connectors, again patina'd in LOS, and raw brass chain that wouldn't cooperate in the LOS (brown is fine, but not for this piece) so I colorized it with African Bronze Gilder's Paste.  Can you believe these colors?!?

I think it looks Elven. 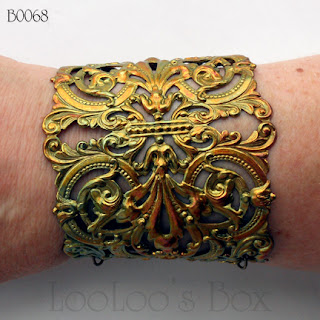 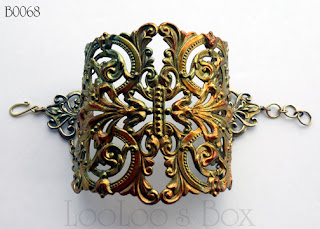 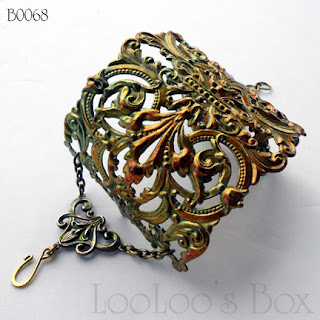 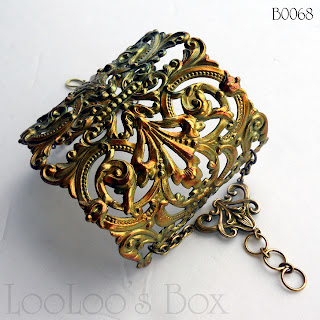 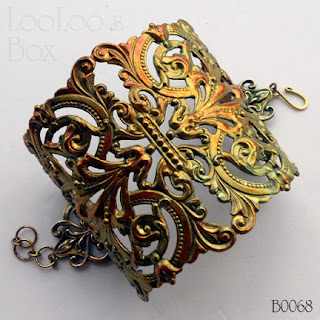 This is a right hand bracer, and was shaped around my 7" wrist.  You can see in the photos how closely it conforms to my wrist. I wouldn't attempt to wear it on a wrist any smaller than 6-1/2" (perhaps 6")  - it'd need an entirely different clasp arrangement; I'll have to make another, smaller one.  It is adjustable to go bigger, though - most adult males would be able to wear it, if they wanted to.  My son is a 6-footer and built like a Viking and it fit him fine.

Isn't it awesome?  I am seriously tempted to keep it.  After all, it fits like it were made for me.  ;-)

Here's my latest steampunk ring; the glue hasn't set yet and it'll need some final cleanup, but I think it looks pretty sweet! That clear AB rhinestone is in a pronged brass setting, which you just don't see done very often. 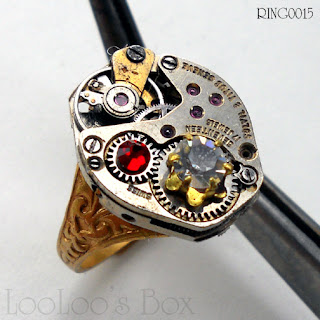 And finally... I freed that poor lizard. 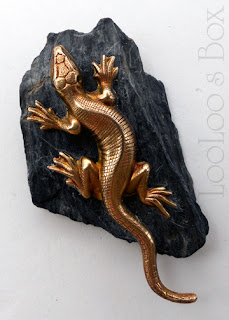 There's a filigree hanger on the back - I just need to figure out what sort of necklace would look best with this fella.  Isn't he wonderful?

Posted by Robin Delargy / LooLoo's Box at 3:21 PM No comments:

Lapis Earrings, Floral Locket, and 'Stuck Between a Rock and a Hard Place'

I decided to make some lapis earrings to go with the necklace I made yesterday.  They aren't an exact match, but I think they are completely gorgeous.  What say you?

Those gorgeous bead caps are from B'Sue Boutiques, in her stunning heavy Silverware Silverplate finish. The embellished ear wires I made myself, by hand; they compliment the dangles quite nicely, I think.  I am super pleased with these.

Remember that locket I showed you yesterday?  Well, here it is: 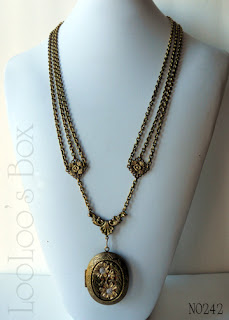 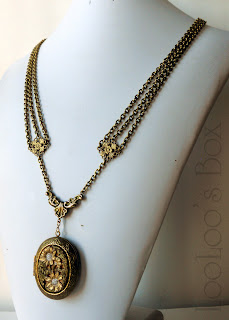 I tinted the chain and filigree connectors to match, although the green tint is proving elusive to photograph.  It made me use bad words, grrr.....


Proof that Robin needs (a) a frontal lobotomy, or (b) a bottle in front of me. 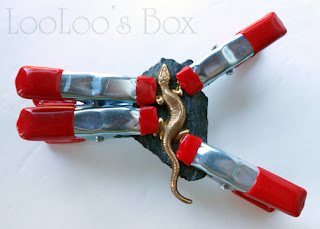 And now to finish up my Wild Victorian Wine Chick necklace, so stay tuned.

Posted by Robin Delargy / LooLoo's Box at 5:26 PM No comments:

I thought it would be fun to post pics of the three steampunk rings I've made so far.  Imagine my amazement when I downloaded the photos from my camera and saw...

Evil Steampunk Stewie!!!  I can't be the only one that sees that smirking, simpering little demon child in this ring, am I?  I swear it was not intentional; I didn't even see it until I looked at the photos.  I love life's little surprises.

Two more rings - these aren't possessed, at least not that I've noticed... 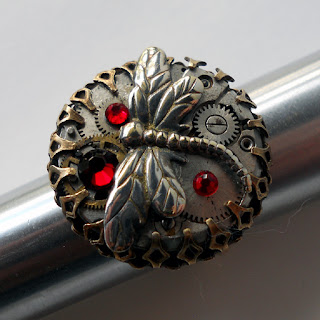 Here's a large locket I am working on - the center floral is cast resin, from a mold I took off an antique carnelian brooch.  I painted it with Gilder's Paste, and tinted the locket to match.  i like it.  :-) 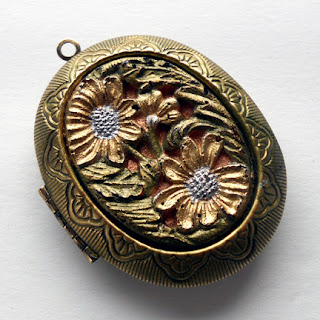 I finished a necklace this morning; it's lapis, gold plated beads and silver plated beads on jeweler's brass (aka Red Brass, Merlin's Gold) wire. The lapis beads have both gold and silver metallic inclusions so I decided to mix metals, and I am so very glad I did.  I like it!  This one's going to go up on Etsy, too. 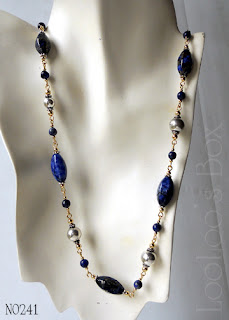 I also unmolded a whole bunch of cast resin steampunk cabochons, some of which I am especially pleased with. I'm going to have some fun with these! 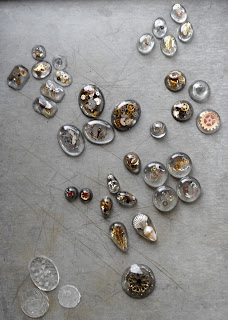 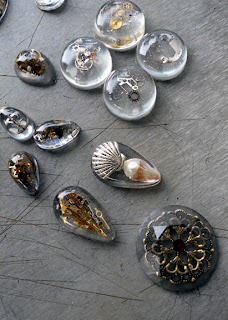 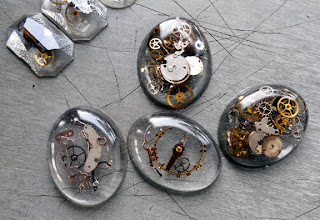 Brass, that is... that wonderful toasty gingerbread cookie nearly-copper color that old brass can get when it's indifferently stored.  I scored some old vintage brass recently and decided to play with a few pieces of filigree today.  Here's how it looked before; it was rough feeling and very dark and dull-looking.
I got out the metal file and elbow grease and went to work smoothing rough edges and then rubbing, rubbing and rubbing some more... then some buffing and polishing, followed by more rubbing.  When I got the metal whipped into shape I wired the two pieces together to make this flower.

It isn't finished, or course; it needs something else in the center, perhaps, and then I need to decide what to do with it, but isn't the metal lovely?  This is what really old brass can look like.

Check out this cool old vintage copper chain I scored, too!  It took a lot of rubbing and polishing to get this into shape, but it was worth the effort! 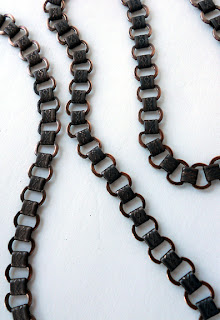 What do you think that flower should be?  It's large, 2-1/2" in diameter - a pendant?  A brooch?  A hair ornament?  The answer will come to me in time, but I always welcome other people's input.  Sometimes I'm too close to see.

Posted by Robin Delargy / LooLoo's Box at 4:39 PM No comments:

In my last order from B'Sue Boutiques was this 70mm raw brass Victorian sea shell stamping.  This was one of those times when I started out with a vision, so I couldn't wait for my shell to arrive. Oh man, was I chuckling with glee when I saw it - it is so dimensional, so beautifully made, so exactly what I expected.  So deliciously shiny and golden... so of course I proceeded to mess with it, to darken it up, to give it patina.

I used the oven method - soak in salt-saturated cider vinegar for 1/2 hour, bake at 450 for 1/2 hour, dip again, bake again, wash rinse repeat... until it was all roasty-toasty looking.  It looked wonderful... but I wasn't finished.  It wasn't... quite... there yet.  It wasn't bodacious. 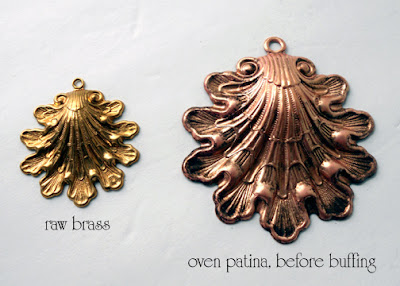 After giving it a good hand rubbing I gently color-enhanced it with Gilder's Paste; the inside with German Silver & Silver to emulate the pearly light interior of natural shells; the outside with African Bronze to give it a bit of that 'I've been underwater for ages and am hosting a small colony of algae' look.  The coloring really didn't photograph well; it's quite subtle.

It is now a Big Bodacious Brass Sea Shell, and now that I have this stage finished I... "Oh, wait", you say; "did you say 'this stage'?  Isn't it finished?"

Oh me, oh my, wipe a tear of laughter from my eye... I've barely begun.  I'll give you a hint as to what's next: I did a Google search for Treasure Maps.

It's cold, dank, gray, gloomy and rather grungy outside today.  Yeah, yeah, it's Tacoma so what else is new, but hey - I still don't have to like it. My Neal is grousing because he is doing yard tasks (nobody's forcing ya, bud) in the grizzle, but me?  I now have no resistance at all to staying in jammies in my slobby work room and playing with my goodies until my fingers bleed.

Today I have a couple things going: first, I am working on putting an oven patina on an enormous fancy raw brass sea shell; I'm also working on a wine-themed necklace centerpiece that I have colored with Baroque Arts' Gilder's Paste, and a few other things.  I will update this posting and add photos throughout the day, so check back often!

While my big bodacious brass seashell is in the oven doing it's thing, I'll introduce you to my Wild Victorian Wine Chicks.  They started out as a silver ox plated stamping from B'Sue Boutiques. Awesome stuff at this site!

Here's the necklace centerpiece with Gilder's Paste applied and dry, but not buffed out yet.  The silver ox piece is what it looked like before; quite a difference, no?

Aren't my Wine Chicks gorgeous?  They will be the centerpiece for a necklace I plan to wear when Neal & I do LooLoo's Box Wine Experience parties.  Neal's a pro Wine Guy, so we offer home jewelry sales parties (my jewelry, of course) with the extra fun of an educational wine tasting for entertainment.

I think I'll make my Big Bodacious Brass Seashell project a separate blog post, so I will sign off... for now.

Is There Anybody Out There?

I am Robin Delargy, or 'She Who Wears All The Hats' for LooLoo's Box Handcrafted Jewelry.  I know nothing about blogging, but I do like to tell stories.  I also am fairly adept at typing with a cat on the keyboard and / or nudging my mouseing hand.  It's a gift.

I work from home (in my dining room, to be precise) and creativity always trumps domesticity, so my house looks like a demilitarized zone.  Plus we have six cats... we don't have dust bunnies, we have dust RHINOS!  Bunnies are for amateurs. 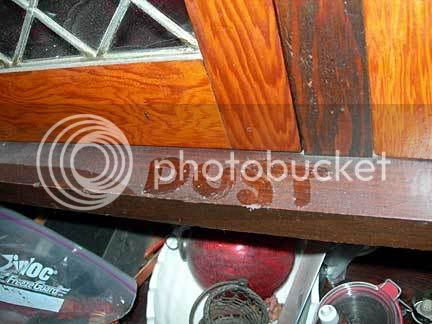 I see this blog as a good place to share what I am creating, why I am creating it and how I feel about it.  I also want to share HOW I am creating it; the techniques, methods, experiments.  To share ideas.  To embrace the triumphs and the failures.  To laugh at the fugly stuff. And frankly, the cats aren't the best cheering squad, constructive criticizers or idea generators... so here I am.

Is there anybody out there?
Posted by Robin Delargy / LooLoo's Box at 11:37 PM No comments:

Robin Delargy / LooLoo's Box
Tacoma, WA, United States
I'm a Sagittarius with an Aquarius moon, born in the year of the Tiger - a water tiger, to be precise. I don't know much about Astrology, whether Western or Eastern, but to those who do I guess that explains a lot. :-)